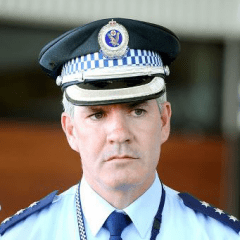 Shortly after 4.15pm on the afternoon of the 6th of December 2012, Detective Inspector Anderson was present at a neighbour dispute at Oakville NSW, where a number of arrows had been fired in the vicinity of people working on a neighbouring property. Detective Inspector Anderson was speaking with the offender who was at the back door of the residence when the offender produced a knife and stabbed him to the face and chest. Detective Inspector Anderson assisted other officers in subduing the offender and a female accomplice before he collapsed from his injuries and died at the scene. He was unable to be revived. Detective Inspector Anderson joined the NSW Police Force as a trainee on 10th of August 1986 before being attested on 7th November 1986. He was initially posted to Parramatta before being transferred to Granville in 1987. He commenced a career in Criminal Investigation at Granville on 3rd of March 1991. He performed those duties at Granville, Castle Hill, Special Crime and Internal Affairs before commencing duty as a Duty Officer at the Hawkesbury Local Area Command on 19th December 2010, where he served until his death.