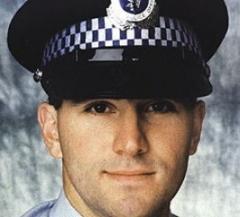 About 8pm on 17 April 1997 Constable Carty and other police had reason to speak to a number of people in the street at Fairfield while carrying out foot patrols. Later the Constable and other police then off duty attended a local hotel the Cambridge Tavern. About 2.10am as he was leaving the hotel Constable Carty was set upon by a number of offenders including some of those he had spoken to earlier and he was stabbed to death. Senior Constable Michelle Auld who had gone to his assistance was also seriously assaulted in the cowardly attack. The Constable was born in 1971 and was sworn in as a Probationary Constable in August 1994. At the time of his death he was stationed at Fairfield.