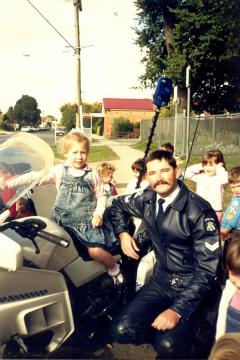 On 30th October 1990, Senior Constable David Hobden was travelling on his police motor bike with the lights and siren operating in response to a call from D24 of ‘offenders on’ in a house in Endeavour Hills. At the intersection of Heatherton Road and James Cook Drive, Endeavour Hills he was involved in an accident with another vehicle. He was conveyed to the Dandenong Hospital where he was diagnosed with a broken leg and two broken ribs. As a result of the injuries he was off duty for 12 months. During the following years the injuries continued to trouble him and he required ongoing medical treatment and a further thirty operations. Eventually the discomfort he suffered from the injuries forced him to retire from Victoria Police in 2005. David Hobden joined Victoria Police as a Cadet on 29th January 1980 and after graduating in 1982 he performed general duties at Force Reserve, Melbourne District Traffic and Patrol Division, Cranbourne Police Station, the Metro Traffic Operations Group and Echo District Traffic Operations Group. Upon his return to Victoria Police after the accident he performed duty in a variety of non-operational roles including recruiting, Youth Advisory Unit and as a Youth Affairs / Project Officer. The injuries he sustained in 1990 subsequently led to David Hobden’s premature death on 24th December 2011.