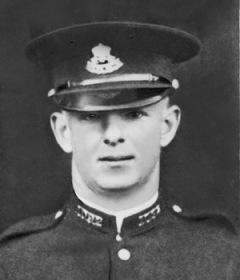 Shortly after 8pm on 12 January 1945 Constable Bailey spoke to a man dressed in an American Naval Uniform outside the Exchange Hotel Blayney. The Constable told the man that he intended to search him and his belongings regarding his alleged possession of a revolver. The man suddenly produced the revolver and shot Constable Bailey in the stomach. The Constable then took hold of the offender and during the ensuing struggle two more shots were fired and the offender was wounded in the wrist. Three railway employees quickly came to the Constable`s aid and the offender was handcuffed and detained until extra Police arrived. The wound suffered by Constable Bailey proved to be severe and he died on admission to the Orange Base Hospital. He had achieved a rare feat in that he had arrested his own murderer. Allegations were later made suggesting that the offender was a contract killer sent to murder another local Constable Stan Grady who had been enthusiastically investigating sly grog sellers and SP bookies in the area. The offender was said to have inadvertently shot Constable Bailey whom he mistook for Grady who was off duty at the time. When shot Constable Bailey was in Mounted Police uniform and until that day Stan Grady had been the only Mounted Constable in Blayney thus the offender`s error. The offender well-known Sydney criminal Cyril Norman – alias Thomas Couldrey – was convicted and sentenced to death. Constable Bailey was born in 1906 and joined the New South Wales Police Force in 1927. At the time of his death he was stationed at Blayney. He was posthumously promoted to Sergeant 3rd Class and awarded the George Cross and the George Lewis Trophy.