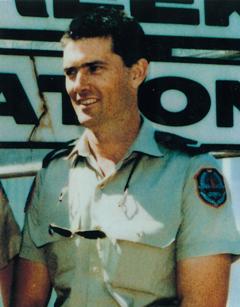 Glen Huitson joined the Northern Territory Police in January 1987. He served in both Southern and Northern districts of the Northern Territory. During his service in the Northern Territory Police Glen Huitson received a Commendation from the Commissioner of Police on 17 March 1994 when he attended a disturbance at a Community near Alice Springs. He disarmed a drunken person who was armed with a knife star picket and was threatening another person with a billy of boiling water. In February of 1999 in Litchfield Park Glen Huitson disarmed an armed man who was threatening the driver and passengers of a bus. He received a Valour Award over this incident. On 3 August 1999 Glen Huitson was on duty at a road block on the Stuart Highway 60 kilometres south of Darwin in bushland. They were on watch for an armed offender who had already shot and wounded two other persons several kilometres away during the previous night. The armed offender had managed to come through bush on one side of the road block where he opened fire with a .30/30 calibre rifle. He fired the first round into the back of a civilian then a second shot at Huitson which struck him and was fatal. For this incident he received the Australia Bravery Medal and a bar to his Valour Medal.