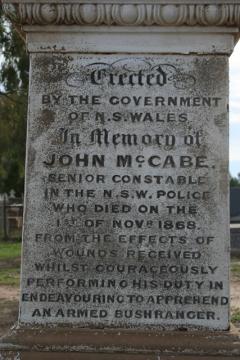 On 6 October 1868 Constable McCabe was searching an area near the Queensland border for bushrangers Frank Pearson (Captain Starlight) and Charles Rutherford. He was accompanied by Constable Hugh McManus of the Queensland Police Force. During their patrol the police stopped for supplies at Shearer’s Inn Enngonia (about 100 kilometres from Bourke). While they were so engaged two riders appeared and entered the inn. Almost immediately Pearson yelled ”Bail up!” with the obvious intention of robbing those present. The two police who had taken their weapons into the inn turned and fired at the two offenders. Constable McCabe who had dropped to one knee and fired was shot in the chest however he managed to fire several times hitting Pearson in the wrist and right arm. The two bushrangers then ran from the inn and escaped. After rallying for almost a month Constable McCabe died as a result of both his wound and the resultant infection. The Senior Constable was born in 1828 and joined the New South Wales Police Force on 23 February 1863. At the time of his death he was stationed at Biree (Brewarrina).