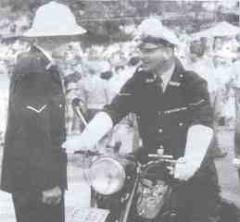 The Constable his wife Elizabeth and baby son Bruce were murdered by the offender Kelly who had placed a bomb outside the Constable’s home at Bega. Apparently the offender had become incensed at being spoken to by the Constable regarding traffic offences and on 29 July 1957 placed a metal dairy container loaded with over 200 sticks of stolen gelignite outside the front door of the Constable’s home. About 2am the offender lit the fuse to the bomb and the dwelling was almost obliterated in the resultant explosion. Constable Coussens’ stepson eight year-old Roger McCampbell survived the explosion. The offender was arrested after a major Police investigation and was later sentenced to life imprisonment. The Constable was born in 1926 and joined the New South Wales Police Force on 18 October 1948. At the time of his death he was stationed at Bega.