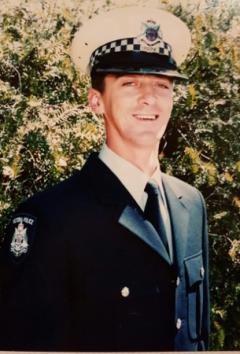 At approximately 2.15 a.m. Saturday 27 September 1986 Senior Constable Maurice Moore was alone in a police vehicle in Brougham Street Maryborough. He intercepted a vehicle being pushed along the street by two men. One man decamped but Senior Constable Moore detained the other man and commenced to make inquiries over the police radio as to the ownership of the intercepted vehicle. Prior to a reply being received the suspect overpowered Moore. He took possession of his .38 calibre police issue revolver then shot Moore in the face and then four times in the back. The killer was later convicted at the Ballarat Supreme Court of Moore’s murder and was sentenced to a lengthy prison term.