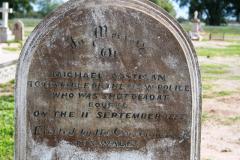 Constable George Armytage, Constable Michael Costigan and Sub Inspector Keegan were all shot during an affray at the Royal Hotel Bourke by a barman at the hotel Samuel Getting. As a result both Constables were killed and the Sub Inspector seriously wounded. The offender committed suicide by drowning immediately after the incident.