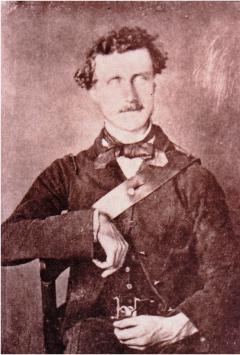 On the 22 December 1857 Trooper Codrington rode out to meet the gold escort from the Turon Valley. His duties included escorting the gold being carried either by coach or packhorse down the steep Wyagdon Hill and into Bathurst. After he was reported missing a search was conducted and his body was found off the side of the Bathurst-Turon Road at the top of Wyagdon Hill. Bushes were found nearby piled on the roadside and it is thought that the bushrangers who probably killed the trooper had hidden at that spot to await and rob the escort. No other satisfactory reason could be found for the murder although the escort passed the spot unmolested on that day. The constable was born about 1832 and joined the Gold Escort about 1854. At the time of his death he was stationed at Cheshire Creek Barracks (Bathurst/Peel area).