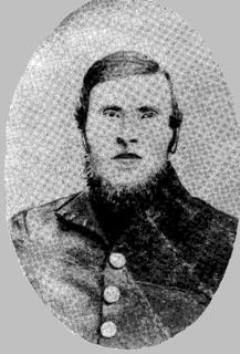 Shortly before 6pm on 26 January 1865 bushrangers Hall Dunn and Gilbert attacked Kimberley`s Inn at Collector. At the time the local police were out searching the area for the bushrangers and the only man on duty in town was the lockup-keeper Constable Nelson. When news of the attack reached the Constable he remarked to his wife that he would simply ‘have to do his best’ against the gang. As he approached the hotel armed only with a police carbine with bayonet attached the Constable was shot by Dunn who had hidden behind a fence post. Nelson was hit in the chest by a shotgun blast and as he staggered Dunn fired again hitting him in the face. He died almost instantly. The bushrangers then robbed the Constable`s body of his personal belongings and the carbine and escaped. The entire incident had been witnessed by young Frederick Nelson one of the Constable`s nine children. He was also fired on by Dunn. The Constable was born in 1823 and joined the New South Wales Police Force on 5 August 1857. At the time of his death he was stationed at Collector.