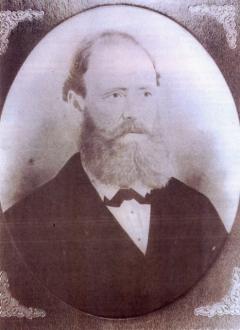 On 18 September 1878 Sergeant Wallings Senior Constable William Souter and Constable John Walsh were searching for a gang of bushrangers when they set up a bush camp near the Wonbobie Inn Marthaguy Creek (near Warren). The following day at 6am the three police rode to the inn where they suspected they might find the bushrangers. Constables Souter and Walsh remained on guard outside while Sergeant Wallings approached the inn. Meanwhile Constable Souter saw a man about 50 metres away carrying a rifle. He rode over to him and was told he would be shot if he came any closer. Souter called to the other police who rode down to him. Sergeant Wallings then fired a warning shot and told the man to surrender however the man replied that he himself would fire if the police came any closer. Senior Sergeant Wallings then advanced on the man and pointed his revolver at him. The man then turned suddenly and dropped to one knee. As he did so he fired at the Sergeant hitting him in the chest. In the confusion the offender ran a short distance away and took cover from the police. A short gun battle took place however the offender being far better armed with a rifle compared to the police revolvers managed to escape. The two Constables then directed their attention to assisting the wounded Sergeant. The wound suffered by Sergeant Wallings proved to be severe and he unfortunately passed away. The Sergeant was born in 1838 and joined the New South Wales Police Force on 15 July 1855. At the time of his death he was stationed at Dubbo.