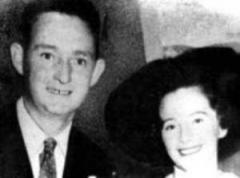 Bill Condon joined the Northern Territory Police on 18 January 1949 and served in Darwin and Maranboy. Constable Condon stationed at Maranboy was in Katherine to help the local police with the crowds at the race meeting. On the evening of 9 June 1952 Condon was dining with his wife in the Katherine Hotel when they heard of a man who had gone berserk with a rifle in the nearby street. Leaving his wife at the Hotel Condon went and confronted Terence Stapleton the armed man who shot the Constable twice: once in the stomach and when he fell again in the thigh. Constable Condon died a short time later. Terence Stapleton was later arrested by Constable Tom Hollow and sent to trial for the murder of Constable Condon. A jury found him guilty and he was sentenced to death: on appeal a new trial was ordered. On this occasion the jury could not come to a conclusion and following a third trial Stapleton was found guilty but insane. He was removed to the custody of Pentridge Gaol. Constable Condon was posthumously awarded the Queens Police and Fire Service Medal for Gallantry. He is buried in the Katherine Cemetery. A plaque at the Katherine Police Station a street in the town and the Police Club remember this brave Constable.